Vitani is a former villain in Disney's 1998 film The Lion King II: Simba's Pride, sequel to the 1994 film The Lion King. She is the daughter of Zira, the older sister of Kovu, and the younger sister of Nuka. Vitani's name was originally going to be Shetani, but as the word means "she-demon" in Swahili, it was changed to Vitani, which can be taken as a portmanteau meaning "I am war".

She is voiced by both Lacey Chabert as a cub, and Jennifer Lien as a young adult.

Vitani was born to Zira and to an unknown lion. Sometime in between the events of The Lion King and The Lion King II: Simba's Pride, Vitani, along with the rest of the Outsiders, was exiled from the Pride Lands, for assisting Scar. Although It is never stated, it is likely that Scar was her father, as is implied with Nuka despite the fact that she is close to Kovu's age and Kovu is not Scar's kid but chosen heir.

Vitani bears a strong resemblance to her mother, but she is differentiated by a tuft of hair on her head. Although Zira and Vitani look similar, Vitani does not have the chunk of her ear missing that Zira bears, or Zira's vicious snarl. As a young adult, her ears are striped with black. However, this feature was not present as a cub, and appeared intermittently after it was introduced. Vitani has blue eyes, and like the rest of the Outsiders, her front claws are constantly unsheathed.

Vitani is something of a tomboy, likely from growing up in such an inhospitable environment. As a result, Vitani is portrayed as steadfast to her mother's cause, tough, and prickly, who has a tendency towards making cynical taunts or cunning remarks. Vitani is mindful of her own brilliance and loyalty (that is, in comparison to the rest of her family). Vitani is shown to openly assist Zira's plan to make Kovu the next king, conscious that Nuka is weak, simple-minded and chicken-hearted. Vitani does seem to show genuine care for Kovu's safety, becoming aggravated towards Nuka for leaving him on his own, and again when she excitedly says 'Kovu, what a guy!' in Zira's number. As a young adult, she sees the error of her ways, and becomes the first of the Outsiders, apart from Kovu, to rejoin Simba's pride.

Vitani is seen first as a young cub, arguing with her brother Nuka over Kovu. She points out that Nuka's failure to babysit Kovu will get him in trouble, and scoffs at his claim that he could be a better leader than Kovu. When Zira returns with the wandering Kovu, Vitani greets him and challenges him to a fight. She later approves of Zira's plot to kill Simba by taking advantage of Kovu's relationship to Kiara.

Years later, a young adult Vitani and Nuka are tasked with setting a wildfire in the Pride Lands while Kiara is hunting. The two gather fire from the elephant graveyard and quickly set a large blaze. This interrupts Kiara's first hunt and forces the princess to flee, which allows Kovu to rescue Kiara and eventually enter Simba's pride. She is later seen spying on Kovu and becoming dismayed when she witnesses her brother sparing Simba's life when he could have taken him from behind. Vitani quickly informs her mother. Zira is angered, and plots an ambush of Simba, in which Vitani takes part. In the course of the fight Vitani notices Kovu's attempts to defend Simba so she kicks him into a boulder and knocks him out to end his interference. When Nuka is crushed by logs which fell from the dam, she rushes forward to see about her brother, and witnesses his death. Along with Zira, she is shown to mourn Nuka's death, but her feelings on Kovu's betrayal are not shown.

Vitani is shown to take part in a battle against the Pridelanders, planned by Zira as an attempt to take the throne by force. She momentarily taunts and then fights Nala, while Zira deals with Simba. Kiara and Kovu intervene, and Kiara argues that the two prides should stop fighting and come together, as there is no difference between them.

Vitani is the first to understand the truth of Kiara's words. She surprises both Zira and Kovu by being the first to rejoin Simba's pride, and makes an attempt to convince her mother that it's time to stop fighting. But Zira is angered and sees Vitani as a traitor. Zira threatens to kill her own daughter as well as Simba's pride, which shocks and disgusts the other Outsiders enough to join Simba as well. She later joins Pride Rock following the death of her mother and presumably lives the remainder of her life with the rest of the lions. It is also possible that Vitani later learns that it was the hyenas not Simba who were responsible for Scar's death. 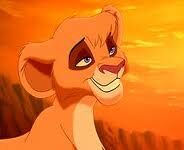 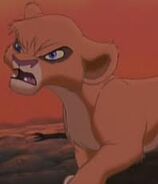 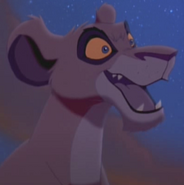 Vitani as a young adult

Add a photo to this gallery
Retrieved from "https://disneyvillains.fandom.com/wiki/Vitani?oldid=153116"
Community content is available under CC-BY-SA unless otherwise noted.