Jeff Bennett
Toucan Dan is a dishonest toucan and one of the minor antagonist in the Timon & Pumbaa TV series. He is voiced by Jeff Bennett.

Toucan Dan has the ordinary toucan appearance: slender with black and white feathers, blue eyes, and a tri-colored beak. In addition to that, he wears a red fez.

Toucan Dan is a dangerously clever criminal mastermind toucan. Timon and Pumbaa call him "Lying No-Good Toucan Dan" because everything he says is a lie. He is a convincing liar and impersonator who makes anyone believe anything he says. He would also do anything to get someone in trouble.

Role in the series

Toucan Dan appears in a total of two episodes: "I Don't Bolivia" and "Alcatraz Mataz."

When Timon has trouble getting a snail out of its shell, Pumbaa suggests he uses Toucan Dan, who is in a cage with a rope tied to his beak so he doesn't speak. When Timon walks up to the toucan, Pumbaa tells him that Toucan Dan is a liar who makes everyone believe anything he says, according to the signs.

Pumbaa has had enough of Toucan Dan repeatedly escaping, so Timon suggests that he impersonates Toucan Dan. The Vulture Police show up and see Timon disguised as Toucan Dan. The vultures release "Toucan Dan" and tell him that they're going to take him somewhere. Timon then admits that he's not really Toucan Dan, but the police won't believe him.

After all the attempts to break out of prison, Timon and Pumbaa arrive at Toucan Dan's hideout to make him admit that he stole the train car full of beak polish and told the police they did it. The Vulture Police show up and find out the truth. After they arrest Toucan Dan, they throw Timon and Pumbaa back in prison since they escaped when they told them not to. 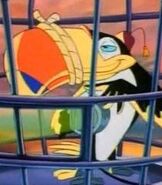 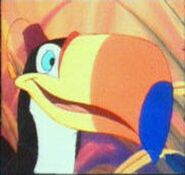 Toucan Dan with Timon
Add a photo to this gallery
Retrieved from "https://disneyvillains.fandom.com/wiki/Toucan_Dan?oldid=130512"
Community content is available under CC-BY-SA unless otherwise noted.