The Tuner Cars catch Mack nodding off to sleep on the way to California. They amuse themselves by playing a prank on a drowsy Mack, nudging him onto the rumble strips along the shoulder. The resulting vibration causes Mack's trailer door to open and a sleeping McQueen to roll out of the trailer. When the chronically-sniffly Snot Rod sneezes, Mack is startled awake and accelerates away, leaving the still-sleeping McQueen behind near Radiator Springs, thus making the Tuner Cars mostly responsible for McQueen's disappearance.

The gang ultimately gets their comeuppance during the end credits of the movie when they make the mistake of speeding in Radiator Springs, causing them to be apprehended by the Sheriff for reckless driving and destruction of property and remanded to the impound yard to do their time. It is then later revealed that Doc Hudson himself sentenced the Tuner Cars to messy roadwork towing Bessie for their actions.

In the Cars video game, a specific level relating to these characters is called "Delinquent Road Hazards", leading many fans to refer to their group by this name. They later appear in the short Tokyo Mater with the exception of Snot Rod.

The Tuner Cars also appear in Cars 2: The Video Game as downloadable playable characters. with racer in tokyo

DJ appears in Cars Land at Disney California Adventure as a drive-around character. He hosts a street party show in addition to general meet-and-greets. 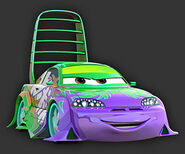 Wingo
Add a photo to this gallery
Retrieved from "https://disneyvillains.fandom.com/wiki/The_Delinquent_Road_Hazards?oldid=152078"
Community content is available under CC-BY-SA unless otherwise noted.