Tex Richman is a human character and the main antagonist in the 2011 film The Muppets. He devises a plan to raze the Muppet Theater and drill for oil beneath it. According to the character's description on the official Muppets website:

...Tex has a personal vendetta against the Muppets. "He blames the Muppets for a terrible event that happened to him at his 10th birthday party," says Cooper. "He is unable to laugh and has vowed to destroy the Muppets." But Tex Richman's inability to laugh doesn't stop him from taking part in other Muppet antics. He may be cold-hearted and conniving, but this oil magnate has a few secrets up his sleeve that are more fun that fiendish.

Tex performs a hip-hop dance number in the film with four 1960's-style Vegas showgirls called "Let's Talk About Me." 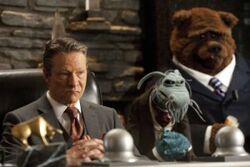 Add a photo to this gallery
Retrieved from "https://disneyvillains.fandom.com/wiki/Tex_Richman?oldid=144986"
Community content is available under CC-BY-SA unless otherwise noted.