The Jungle of India

Shere Khan is the main antagonist of The Jungle Book. A powerful, suave tiger, Shere Khan has nothing but disdain for his victims. His reputation is such that he need only show himself to intimidate the inhabitants of the jungle. His only fear is fire, which the man-cub Mowgli uses to his advantage in the film's climactic battle. He ranked #12 in the top 30 disney villains (one better than Chernabog, but one under Gaston). He was voiced by aristocratic cad George Sanders who had a talent for depicting villainous characters, then later voiced by Tony Jay, who too voiced Judge Claude Frollo. As of 2006 Corey Burton voices Shere Khan, this makes him the third character Burton has inherited from Tony Jay. The other two characters are The Magic Mirror and Judge Claude Frollo.

In Rudyard Kipling's novel, Khan was treated with less respect than in many of the film adaptations. Although still feared by many jungle animals, Shere Khan was actually a lame tiger, born with a whitered leg and thus nicknamed Lungri by his own mother (Lungri meaning "The Lame One"). His disability hindered his capacity to hunt wild prey, so he became a man-eater. Because of this, he was seen with disgust by other jungle predators, like Bagheera the panther, because eating men was against the Law of the Jungle. Shere Khan, however, regarded himself as the rightful lord of the Jungle, and was seen as such by Tabaqui, his jackal minion, as well as by some of the younger wolves in Mowgli's pack. Actually, it was Shere Khan's plan to turn the young wolves against Mowgli so that they would expell him from the pack, making him easier prey for himself. Mowgli, however, managed to save himself and Akela (the old wolf pack leader) from Shere Khan and his wolf followers by scaring them away with a burning branch. Later, Mowgli decided to put an end to Shere Khan's reign by trapping him in a ravine and having a herd of domesticated water buffalo trample him to death. It is then revealed that humans knew Shere Khan very well because of his man-eating, and that the government had offered a reward to whoever killed him and took his pelt to the authorities. Also, superstitious villagers believed that Shere Khan was the reincarnation of an evil man who was also lame of one leg.

While remaining as haughty as he is in the book, Shere Khan isn't crippled anymore. He is quite similar to Hannibal Lecter in that he is eerily polite to his victims before he kills and eats them. Feared and renowned throughout the jungle, he is unique among villains in that he almost never loses his temper. Rather, he is able to intimidate those around him just by looking at them. He possesses great strength of will and body and appears immune to Kaa's powers. Khan deeply hates humanity, the reason being that man is responsible for the death of his family by use of guns and fire. Khan afterwards developed a fear of both man's gun and fire. When Mowgli is revealed to be lost in the jungle, he does all in his powers to destroy him. He appears in the final third of the movie, being seen stalking a deer for food. Hathi comes by with his herd and scares it away, much to Khan's disgust. Khan, after searching for a while, finally comes into contact with Mowgli at the climax of the film and is amused by the fact that Mowgli doesn't seem afraid of him. Ultimately his vanity leads to his downfall, when he gives Mowgli a sporting chance by giving him time to run. He is annoyed when the man-cub choses not to run but before he can do anything about it, Baloo arrives and grabs the tiger. Finally showing his fiery temper, Khan swiftly and easily overpowers Baloo but is set upon by a flock of vultures who bear a striking resemblance to a certain human rock band. Presently, a well-placed bolt of lightening (of the kind so often seen in Disney films) ignites a dead tree. While Khan is preoccupied fighting the vultures, Mowgli ties a burning branch to his tail. With fire being one of the two things he fears, Khan has a panic attack and flees in terror, leaving the vultures to remark, "That's the last we'll see of 'im - went off like a flyin' comet 'ee did!".

The vulture was proven wrong in the Disney sequel The Jungle Book 2 when Shere Khan returns to the jungle, humiliated and determined to kill Mowgli, this time as revenge. He has overcome his fear of fire and searches for Mowgli in his village and later through the jungle. After finally finding him, Khan disregards Shanti and Ranjan and chases Mowgli to a temple ruin surrounded by lava. He then declares he will catch Mowgli and have his revenge. He fails, and becomes trapped under a stone tiger head on a slab surrounded by lava. He isn't killed, but misses the opportunity to kill Mowgli once again. It is unknown if he ever got out of the stone tiger head or not but presumably he does not and dies by one of three possible, shown by analyzing Khan's surroundings, fates; one, lava engulfs the slab he is trapped on, two, the stone tiger head pressures the slab into the lava, and three(probably the most likely), he eventually dies of starvation and/or dehydration as he is trapped in never ending heat. Shere Khan was included in the cast of characters in the Disney Afternoon series Tale Spin, being cast as the richest corporate magnate in the harbor town of Cape Suzette. He was a nominal villain who occasionally allied with the heroes when it suited him - such as when he allowed Baloo to fly his plane after destroying the robotic pilot he had been using previously, as the pilot's A.I. lacked the ability to cope with unexpected occurrences during the flight. He was voiced by Tony Jay, who provided a voice remarkably similar to George Sanders' rendition in both the series and in The Jungle Book 2.

In the 1994 film, Shere Khan is presented as a more sympathetic character and anti-hero. He does not kill for sport, and his sole goal is to protect the jungle from those who break "the laws of the jungle", including humans who trespass with guns and kill animals for fun and not food. (Of course, hunters are scared to death of him, with Buldeo describing him at one point as "The Devil"). At the beginning of the movie, Shere Khan sees numerous guards shooting animals for fun, and becomes enraged. That night, he attacks the humans' camp, killing two guards (who were amoung the hunters Khan saw) and also Mowgli's father, who was defending one of the hunters, in the process. He is not seen again until the second half of the movie, where he mauls Lt. Wilkins, a henchman of Captain William Boone, the movie's main villain, and after the climactic battle between Mowgli and Boone, Khan and Mowgli meet face to face for the first time. Khan is obviously distrusting of Mowgli (and all humans in general), and attempts to scare him away by roaring in his face, but Mowgli stubbornly roars back and stares Khan down. Khan develops a newfound respect for Mowgli, and begins to see him as a fellow "creature of the jungle".

In the 1998 direct-to-video The Jungle Book: Mowgli's Story, Shere Khan returns as the main villain, though the film is live-action like the 1994 film. But like the animated movie, the animals, including Shere Khan, talk; he is voiced by Sherman Howard. This Shere Khan, though, is different from his animated counterpart. He has his original sidekick, Tabaqui the despised and cowardly spotted hyena. And while he can be polite, he is mostly brutal and ruthless. He even proves to be a great strategist and tactician as it was he who succeeded in separating Mowgli from his pack and enticing the monkeys in kidnapping him by promising them Baloo's secret honey. To make Shere Khan very evil, he actually succeeds in killing one of Mowgli's loved ones. Unlike his animated counterpart, who seemingly kills Baloo, who he tries to save Mowgli from him, Shere Khan completely kills Mowgli's wolf mother, Raksha, when she tries to rescue him from the monkeys and Shere Khan. In the end, Mowgli scares Shere Khan off with fire, and banishes him for his evil. Mowgli especially warns him that if he should ever return, Shere Khan will be destroyed as shown when the man-cub burned a picture of a tiger right before his enemy's horrified eyes. While he is heavily the same as his animated counterpart, his actions and fate make him similar to Man for killing the hero's mother, and Captain Hook for trying to kill the hero and in the end being banished by him.

Shere Khan also appeared as a main character in the Disney Channel series Jungle Cubs, where he was portrayed as a tiger cub, more a bully than a predator, but nonetheless friends with the other characters. In this show, Shere Khan is voiced by Jason Marsden. The producers originally wanted Khan to keep his British accent for the show, but later changed their mind and Shere Khan ended up with an American accent, completely different from that of his adult version. In the series, Shere Khan is arrogant and short-tempered, but during the first season he is seen as the group's protector, sometimes even scaring predators away from his friends. Once in a while he gave hints of a softer side to him, such as his grieving along with the others when they thought Kaa had died, or his saving Louie's mischievous nephews from being eaten by a Babyrousa. Although his parents never appear, his mother's roar is heard in the first episode. In the second season Shere Khan became more independent and spent less time with his friends; he is also often shown to be feared already by the jungle animals. The adult version of himself appears in the Jungle Cubs: Born to be Wild video(again voiced by Tony Jay), and in these cutscenes, he attempts to kill Mowgli when he, Baloo and Bagheera walk into his part of the jungle. Baloo and Bagheera try to reason with Khan by recounting the Red Dogs story, in which they and the other animals saved Khan's life, but Khan refuses to listen. Baloo throws a stone at a beehive and grabs Khan by the head, letting go only when the beehive falls on his head. Khan, with the beehive still on his head, runs away from the angry bees.

A tiger who looks a lot like Shere Khan in facial structure makes an appearence in the episode Good Neighbour Cruella of 101 Dalmatians: The Series, although his fur is a noticably different shade of orange. Shere Khan is a recurring character in the animated series TaleSpin and is portrayed as a buisnessman of a company named Khan Enterprises. Whilst he isn't necessarily a villain he is ruthless in his practices and often causes trouble for the protagonists. He was voiced by Tony Jay at the time. 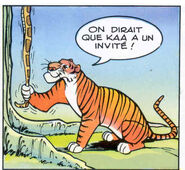 Retrieved from "https://disneyvillains.fandom.com/wiki/Shere_Khan?oldid=68624"
Community content is available under CC-BY-SA unless otherwise noted.