To rule the world, To destroy Captain America, The guide to the Soul Stone

Red Skull a.k.a.: Johan Schmidt is a Marvel villain and archenemy of Captain America. He is the main antagonist of the 2011 MCU Marvel film, Captain America: The First Avenger in which he gets the Cosmic Cube's powers and is the leader of a terrorist organization known as HYDRA. He is a Nazi soldier who got tested for a super soldier serum, which ended badly with his face being a reddish skull-like face hence the name. He appears in every Marvel TV series and film and video game with Captain America. He also appears in the 1990 low budget Captain America film renamed Tadzio de Santis and is Italian rather than German. Most recently in 2013, he made an appearance along with several other Marvel characters in "Phineas & Ferb: Mission Marvel," in which he is the main antagonist of the special. Red Skull, Whiplash, Venom, and MODOK decide to team up with Doctor Heinz Doofenshmirtz in order to spread chaos and mayhem throughout Danville. After a tour around his evil lab, Doofenshimirtz shows the Marvel villains his Power drain-inator, which he used to drain the powers away from all the Marvel superheroes. Whiplash and all the other Marvel villains eventually get sick and tired of hanging out with Doofenshmirtz  and imprison him in a cage and ruse out Perry the Platypus and imprison him too. Red Skull then orders his legion of Marvel villains to upgrade Doofenshmirtz's Power drain-inator and turn into a Particle drain-inator to use to destroy Danville. Fortunately for the Marvel heroes, thanks to Candace, the heroes got their powers back and were able to defeat Red Skull and the other Marvel villains. Red Skull and the other Marvel villains were taken to prison by Nick Fury and Fury gives Phineas and Ferb a salute before they leave. The MCU Red Skull is revealed to have survived the incident with the Teserect in the 2018 film, Avengers: Infinity War and tells Thanos the only way he can obtain the Soul Stone is to sacrifice the life of the person he loves most. 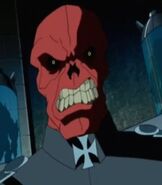 Red Skull in the 1994 "Spider-Man the Animated Series" cartoon. 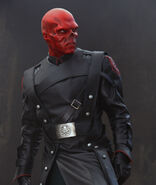 Red Skull in the Disney Channel/Marvel crossover "Phineas & Ferb: Mission Marvel".
Add a photo to this gallery
Retrieved from "https://disneyvillains.fandom.com/wiki/Red_Skull?oldid=152565"
Community content is available under CC-BY-SA unless otherwise noted.