Varies with each episode

Corey Burton
Quint is a muscular man with varying roles, who appears as the main antagonist in the Timon & Pumbaa TV series.

He was voiced by Corey Burton.

Quint is muscular in build with black hair, a pink nose, and a shaven face, though his clothing is constantly changing along with his occupation in the show. For example, in the episode "Truth or Zaire," he appears as a wildlife photographer, while in "French Fried," he is a French cook trying to make escargot out of Speedy the Snail, a friend of Timon and Pumbaa.

Though his occupation does vary throughout the series, he will almost always go out of his way just to annoy Timon and Pumbaa. Most of the time Quint is vain, sneaky and arrogant, but has been known in a few episodes to be merely a non-villainous man with an honest job (though still manages to get in the way of Timon and Pumbaa's plans somehow or another). For example, in "Klondike Con," Quint begins as a courteous man helping Timon and Pumbaa, with Timon not gaining his trust, helping them get gold. When Timon and Pumbaa have the sack of gold with them as they are falling off a cliff, Quint says to throw the gold to him to help them get back up. Timon, still in distrust, declines his offer. However, Pumbaa reminds Timon all the good things Quint had done for them, so Timon decides to throw the bag to Quint so he could save them. At that moment, from "Courteous Quint" he turns into "Claim Jumper Quint" and steals the gold from Timon and Pumbaa. 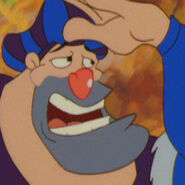 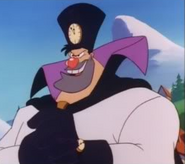 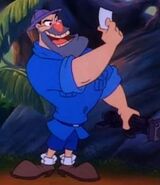 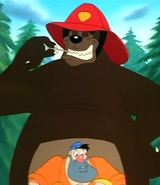 Add a photo to this gallery
Retrieved from "https://disneyvillains.fandom.com/wiki/Quint?oldid=149953"
Community content is available under CC-BY-SA unless otherwise noted.