Wickedpedia
Register
Don't have an account?
Sign In
Advertisement
in: Characters, Masters of Evil, Live-Action,
and 29 more

She was both voiced and portrayed by Susan Sarandon.

Narissa apparently became Queen of Andalasia only after marrying into the royal family. However, now that the King has expired Narissa's rule as Queen is hanging by a single thread. This 'thread' is kept in place by her affectionate connection to her man-servant Nathaniel, whom she instilled with the hope of being her King if he kept Prince Edward from chasing princesses and busy hunting trolls. For if Edward were to wed, Narissa would be stripped of her throne and replaced by the Prince's more than unworthy (in her opinion) bride. Yet now that the Prince's wedding day has arrived, the Queen, in a desperate act to save her crown, transforms her beautiful visage into that of an old hag. With this disguise, Narissa lures Giselle, the princess-to-be, to a magical portal which she promptly casts her into, banishing her from Andalasia to a land "where there are no happily ever afters", namely the Big Apple itself, New York City. [1]

In her cavernous lair, Narissa watches as Giselle and Prince Edward frantically try to locate each other in the packed overpopulated streets of New York City. Frustrated by the couple's optimism, the insidious Queen convinces Nathaniel, her ever self-deprecating pawn, to hunt down Giselle and murder her so that Edward can never find her. To fulfill her villainous task, Narissa grants Nathaniel three poisoned apples which, if consumed, would put Giselle in an irreversible coma until the clock strikes twelve that night, in which case she would perish forever.

Keeping an eye on Nathaniel's every move, Narissa grows increasingly furious as his devious efforts fail to succeed. After he spoils two of the deadly ruby apples, the evil Queen exclaims that she will "kill the little wretch myself!" using the last of her batch. Narissa arrives in New York City, an event marked by a spectacular and frightening display of her destructive powers; demolishing a massive electronic advertisement in Times Square, and burning the engines of passing automobiles. With Nathaniel, the Queen uses her terrible powers to locate Giselle, who was attending the King's and Queen's Ball within the MetLife Tower.

At the Ball, Narissa confronts Giselle once again as the old hag. Understanding now that Giselle has fallen in love with Robert Philips, the Queen offers Giselle the poison apple claiming that it will clear her of the horrible memories of New York. Giselle, who believes her love towards Robert can never come to fruition, accepts the apple and takes the fatal bite. In the elevator, attempting to escape with Giselle's body, Narissa invokes a Latin incantation and reverts to her majestic true form when Prince Edward halts her escape and discovers the lifeless body strewn across the floor. The Queen merely shrugs it off, stating that Giselle had spontaneously fainted; however, Nathaniel, tired of his maltreatment at the hands of Narissa, divulges her nefarious plot to the ball-goers. Robert, remembering Giselle's previous statement that True Love's Kiss is the most powerful force in the world, kisses her and breaks Narissa's deadly enchantment.

Screaming another Latin incantation, Narissa transforms into a towering, monstrous dragon. She seizes Robert and breaks through the ball room windows before climbing to the top of the MetLife Tower. In a rush of heroism, Giselle and Pip run outside and climb to the top of the spire to meet Narissa in one final confrontation. Narissa dryly notes that Giselle is the princess coming to the rescue while Robert is the damsel in distress. Shrieking victoriously, the vicious queen is suddenly thrown off balance by Pip and drops Robert but Giselle saves him by throwing Edward's sword, pinning his jacket sleeve to the spire. Narissa finally loses her grip on the spire and falls from the side of the tower. On impact with the ground, Narissa was reduced to thousands of sparkling glittery particles, never to utter Latin (or do anything else for that matter) again.

Narissa proves herself a formidable sorceress on numerous occasions, on a par with Maleficent. She exhibits the ability to discharge electrical energy through her fingers and is also capable of summoning fire whenever she is angry or excited. She has the capacity to shape shift without the need of potions, unlike the Evil Queen. Narissa is also capable of using spells to communicate with people such as her subordinate, Nathaniel, through reflective surfaces even though they are in separate worlds. She is also able to teleport herself and other objects, such as poisonous apples. with relative ease. Narissa is also able to track and locate people through the simple use of her magic through reflective surfaces such as water.

Narissa is shown to be very intelligent as exemplified by her inventive plans over the course of the film and also appears somewhat more socially gifted than Giselle and Edward in dealing with the normal humans from our world, evidenced by her calmly soothing the crowd after Giselle’s “swoon.” Narissa is a gifted liar and actress and is rather charismatic. Fittingly, given her namesake, she is portrayed as quite narcissistic an example being Nathaniel trimming hedges into her likeness, presumably at her behest. In addition to this, she shows a fondness for being the center of attention. Narissa is highly Machiavellian as evidenced by her manipulative and fickle behavior toward Nathaniel. She exhibits absolutely no remorse for her actions and ultimately cares for no-one but herself. The narrator at the beginning of the film refers to her as "selfish" as does Nathaniel at the movie's climax.

Like most Disney villains, Narissa exhibits a megalomaniacal obsession with power as all of her actions throughout the course of the film are for the purpose of securing her hold on the throne and her domination of Andalasia. 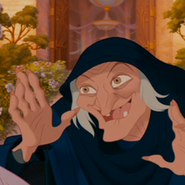 Narissa disguised as a hag.

Narissa in the form of a dragon.

Community content is available under CC-BY-SA unless otherwise noted.
Advertisement