Things you know that ain't
Relatives of Satan (spanish translation)

Song performed by Cliff Edwards
The Pink Elephants are minor antagonists in Disney's 1941 film Dumbo. They are hallucinations that Dumbo and Timothy Mouse have after drinking the champagne that the clowns accidentally drop in Dumbo's water bucket.

During the film, the clowns Dumbo has worked with are changing into their casual clothes and celebrating a successful fireman act with champagne. They come up with a plan for their next act, and while they are leaving to tell their boss, one hits the table with the bottle of champagne and the champagne dropped into Dumbo's water bucket, which is right outside their break tent. Dumbo and Timothy drink the spiked water and become instantly and heavily drunk. And at Timothy's request, Dumbo blows some bubbles, the last and biggest transform into elephants and they start to hallucinate that these elephants are moving. These colorful hallucinations sing and dance around and scare Dumbo and Timothy. Eventually, the effects of the champagne wear off and the elephants slowly fade away.

The characters appear in several episodes of this series.

In the episode "Mickey and Minnie's Big Vacation," while Donald and Daisy are in charge of the club, they saw the Pink Elephants as one of their faulty acts (along with 101 Dragons). They cause a havoc to the guests, such as acting as a canoe for Pocahontas, being weights for Hercules (eventually causing him to fall through the floor), drinking Clarabelle's milk, knocking Timon into Goofy's washing the dirty dishes, throwing Ursula on top of him, trying to stealing Pooh's honey (which makes sense because elephants are essentially the same as the heffalumps) and, of course, frightening Dumbo. Fortunately, Timothy was able to get rid of the technicolor creatures by scaring them away with a wooden sign with the word "Boo" written on it.

After accidentally drinking the alcohol, Dumbo blows a large bubble from his trunk. The bubble turns into an elephant, which then blows a second elephant out of its trunk. This continues until there are four elephants.

The elephants begin blowing their trunk-like trumpets, and the trunks merge together into a yellow giant trumpet, which then explodes, and becomes a portal for all of the pink elephants as dozens of elephants march out of the remains of the trumpet.

As part of their marching band, a fat elephant marches behind a small elephant. The tiny elephant is using his trunk as an instrument, while the fat one is shaking two cowbells. The fat one accidentally steps on the small elephant over and over, irritating the small one. The tiny one eventually has enough. The small elephant then kicks the fat one in the butt, causing him to split into three elephants, who humiliate the small one by blowing their trumpets in his face. He gets angrier and grows into a giant elephant, then smashes the three elephants with a pair of cymbals. They explode into dozens of tiny elephants, who march away and surround Dumbo.

As they march, they swell up, until there's no more room and they explode.

Dumbo’s hallucination gets worse as more and more elephants begun marching through his dream. Some of the elephants are marching around the bed of an elephant child, who was terrified to see the marching elephants and hides under his covers before his bed and the elephants spiral off into the distance.

Two elephant heads appear, one from the bottom of the screen and one from the top. They all turn and notice each other and was frightened. They flee, startled.

Two elephant-like worms, a male and a female, passed and greeted each other. The elephant worms are revealed to be the trunks of two elephants. However, as the elephants walk right past each other, they were merged together, with the colors of their skins being mixed together. One of them was shock to realize that he was merged with the other elephant. Wanting to separate themselves, both elephants begun pulling their merged body apart. However, they fail and snap back into each other, exploding into a blast of colors which then turns into a small elephant.

The elephant dances as five more elephants of differing colors come out of that one, the screen then shuffles them together into an elephant made entirely of 17 heads. One of the heads greeted two of the other heads before zooming close to the screen, but the two heads try to push it away, but the center head pushes back the two heads as it comes closer to the screen, and his eyes turn into pyramids as the head vanishes.

A camel-elephant comes out from between the pyramids and starts walking, looking at Dumbo and Timothy with a friendly smile so they won’t be scared of the hallucination. However, she walks into a trap as one of the pyramids she walks past by turns out to be a snake charmer elephant in disguise, who then transforms back to its true form and plays some music at her. The camel hears the music and becomes frightened and panics. She felt strange within her body and thinks of something to save her life. The music attracted the camel’s trunk and the trunk begun rebelling against the camel and begun turning into a live creature. The camel tries to fight back but was powerless.Her footprints vanished as she transforms. The camel has transformed into a snake. The snake then begun taking control of the body and sways to the music. However, as she was dancing, she realizes that the dance could have her transformed into another figure, however, in a blink of an eye, she has morphed into a belly dancer before she can respond. The belly dancer then took control of the body and begun dancing. She then disappears, except her belly, which transforms into a ball bouncing around, then transforms into an eye, and in a few seconds, the eye vanishes.

A group of elephants begun blowing their trumpets, these elephants are then revealed to be a stage curtain. The curtains are then ripped into pieces, starting a performance, as a male and a female elephant then begun dancing.

The male grabs the female’s trunk but couldn’t lift her up and continues trying. The female became annoyed with the male yanking her trunk and pulls back and swing him around and the male turns into a staircase. She climbs up the stairs and jumps into a lake. The male turns into a canoe and paddles around the lake, using his trunk as a telescope and a paddle. Meanwhile, the female elephant comes out of the lake and pretends to be a fountain. The male elephant spots her with his telescope and she squirt him with water, then runs away and starts ice skating.

The male skates with her and nearly falls, but she catches him and they skate off. They return on skis and ski down a slope, covering themselves with snow. They shake the snow off and touch their trunks, creating a bolt of lightning (which is unexpected for them). The male grabs the lightning as the female continues dancing. He rubs it on his butt (turning his back to us as he does so) then turns it back into a lightning bolt and hurls it at the female. It hits her in the head and both elephants explode into many couples of dancing elephants.

The elephants transform into vehicles and begin rampaging around until they all collide and cause an explosion. They then transform into clouds as the alcohol wears off and Dumbo and Timothy mouse recover from their hallucination.

In the original storyboard, the Pink Elephants was planned to be one of many Beetleworx enemies in the Epic Mickey, but they were scrapped in the final storyboard.

The Pink Elephants appear in certain shows at the Disney Parks.

The Pink Elephants are the first set of characters Donald Duck encounters in the show. When they first appear before him, they perform a shortened version of the original Pink Elephants song. After this, Donald thanks them, and watches them exit.

1.Both the snake charmer and the belly dancer have no ears.

2.The snake charmer does not have a tail.

4.A mistake can be spotted when the three elephants were humiliating the small elephant.

The elephants merged their trumpets together.

As part of the marching band,a small elephant is using his trunk as an instrument while a fat elephant behind him is shaking two cowbells.

The big elephant accidentally steps the small one over and over.

The small one eventually has enough.

He kicks the fat one.

The fat one splits into three elephants.

He smashes the three elephants with his cymbals.

They greeted each other.

The elephant-like worms are then revealed to be the trunks of two elephants.

The colours of their skins were mixed and their bodies were merged as they walked right past each other.

One of them was shock to realize that both of them were merged.

But go flying towards each other instead.

They snap into each other and explode.

The camel elephant comes out from between the pyramids,and smiles at Dumbo as she begun walking.

Something's different about that pyramid...

Look out behind you!

The camel elephant continues her walk,still smiling at Dumbo.

She became frightened and panics.

She felt strange within her body and think of something to save her life.

Her trunk begun to turn into a live creature.

The trunk pulls the camel elephant back into the direction of the music,and begun rebeling against the camel.

The camel elephant tries to fight back. 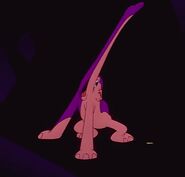 As she transforms,her footprints vanished.

The camel elephant has transformed into a snake. 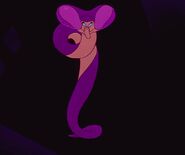 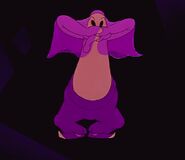 The snake has transformed into the belly dancer elephant. 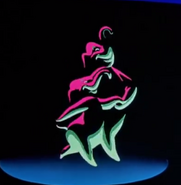 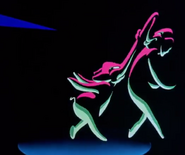 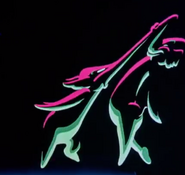 He yanks on her trunk but couldn't lift her up.

The female elephant then became annoyed with the male yanking her trunk and eventually pulls back. 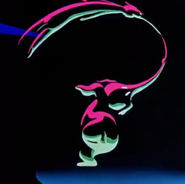 The female dancer swings the male around. 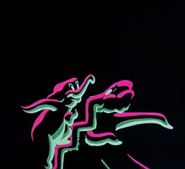 His trunk acts as a staircase. 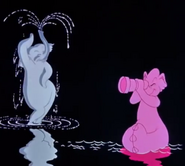 The male searches for the female. 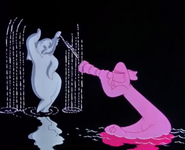 As he notices her, she squirts him with water. 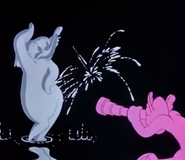 The male falls down while ice skating. 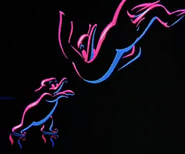 The female skates over... 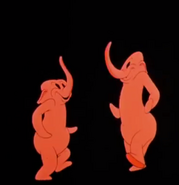 The two of them have a romantic dance together. 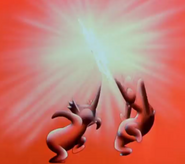 Lightning appears when their trunks touch. 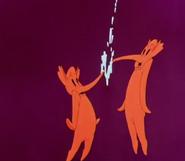 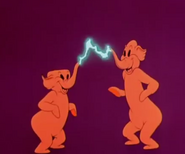 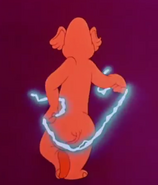 The male dances with the lightning.

He hurls the lighting bold at the female.

She didn't notice him throwing the lightning. 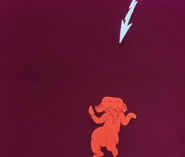 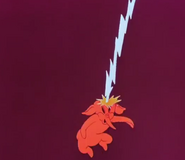 The lightning strikes her in the head. 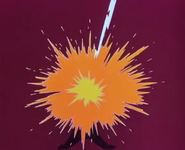 The female dancer is blown up by lightning.

The lightning hitting the female creates many couples of dancing elephants.

The belly dancer elephant have no ears.

The snake charmer elephant have no ears and does not have a tail.

A mistake can be spotted when the three elephants were humiliating the small elephant.
Add a photo to this gallery
Retrieved from "https://disneyvillains.fandom.com/wiki/Pink_Elephants?oldid=150197"
Community content is available under CC-BY-SA unless otherwise noted.