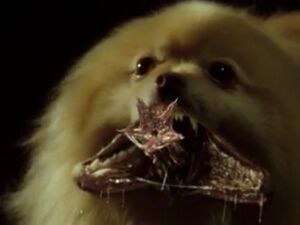 Pac-Man is a prototype dog from the Blade movies, an experiment for injecting the vampires' gene in other species than humans. He has become Jarko Grimwood's pet, who brings him anywhere with him.

Pac-Man is with Jarko during Hannibal King's torture, and acknowledges the human as an enemy. When he breaks free, Pac-Man intercepts him, followed by two pitbulls injected with vampire DNA. The three dogs charge King and force him to flee, but, just in front of a window, Hannibal jumps and hangs on a tube, thus making all the dogs fly out of the window and fall to their deaths. Since a brief time later dawn comes, Pac-Man is supposed to be dead along with the two pitbulls.

Pac-Man possesses all the vampires' abilities, so he's more strong, fast and resistant than a normal dog and feeds on blood. He shares the same weaknesses, such as sunlight, silver and garlic.

Retrieved from "https://disneyvillains.fandom.com/wiki/Pac-Man?oldid=149332"
Community content is available under CC-BY-SA unless otherwise noted.