The Incredibles
The Omnidroids were the secondary antagonists of The Incredibles. They were a series of intelligent, destructive robots designed by Syndrome as part of his plot to defeat all superheroes. Syndrome's plan eventually backfired, however, when the final Omnidroid turned on him.

The Omnidroid v.X1 was the first Omnidroid involved in the training sessions for Operation Kronos.

The v.X1 was created an unknown time before Mr. Incredible came to Nomanisan Island, and was destroyed by Macroburst an equally unknown time later. It was succeeded by the Omnidroid v.X2. Before its destruction, the v.X1 killed the Supers, Universal Man, Psycwave and Everseer.

Only one real picture of the v.X1 exists, and even in this the details are poor at best. Its main body is in the rough shape of a trash can with an eye in the center and two arms. It may have had wheels or tank treads for mobility.

Omnidroid v.X3This robot killed the Super, Downburst. It was destroyed by the Super, Hypershock.

This robot killed the Supers, Hypershock, Apogee, Blitzerman, Tradewind and Vectress. It was destroyed by Gazerbeam.

This robot killed the Supers, Gazerbeam and Stormicide. It was defeated by Gamma Jack.

This Omnidroid is the one whose schematics Mr. Incredible is shown in Mirage's message. Before Mr. Incredible comes to Nomanisan Island for the first time, the Omnidroid 07 has been destroyed or retired.

The Omnidroid 08 was defeated by Mr. Incredible. Mirage had referred to it as the "9000", but "08" was visible on the shell of the robot.

The Omnidroid v.10 was defeated by the Incredibles and Frozone. 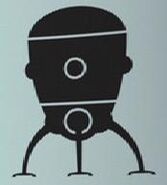 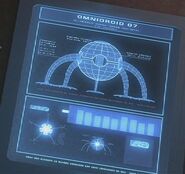 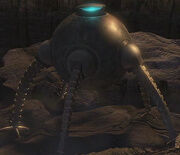 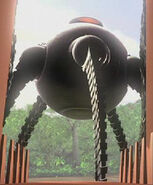 Omnidroid v.10
Add a photo to this gallery
Retrieved from "https://disneyvillains.fandom.com/wiki/Omnidroids?oldid=153149"
Community content is available under CC-BY-SA unless otherwise noted.