Maurice LaMarche
Mr. Big is a former antagonist in the 2016 Disney animated feature film, Zootopia. He is an arctic shrew with an ironic reputation of being the most feared criminal in Zootopia. He redeems himself after his daughter Fru Fru convinces him to spare Nick and Judy's lives in the film. 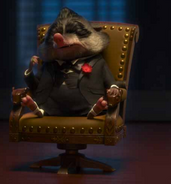 Add a photo to this gallery
Retrieved from "https://disneyvillains.fandom.com/wiki/Mr._Big?oldid=138884"
Community content is available under CC-BY-SA unless otherwise noted.