Mary & Sarah Sanderson are the two secondary villains in the 1993 Disney Halloween themed film Hocus Pocus. Even though all three are considered the villains in the film, the oldest of the sisters named Winifred ("Winnie") is the most prominent of all three, so Mary and Sarah take on the role of sidekicks to her. They are a spoof of Curly and Larry (non-villains) from The Three Stooges.

In the movie, the three sisters are known as the legendary "Sanderson Sisters", three witches who lived in Salem, Massachusetts during the Witch Hunt Era. They were hanged on All Hallow's Eve 1693 for witchcraft, but due to a spell on themselves cast by their sister Winnie, they would rise from the dead on an All Hallow's Eve when the moon was full and a virgin lit the Black Flame Candle. They return three hundred years later on Halloween of 1993 when a disgruntled and skeptical teenager named Max lights the candle, disbelieving the legend of the "Sanderson Sisters".

Neither Mary or Sarah are seen to have the intellectual capacities or finesse of their older sister Winifred, but possess formidable skills that Winifred requires to execute her plans for immortality and eternal youth.

Sarah is seen to be extremely attractive, but extremely naive, funny, and ditzy. At one point in time, she'd seduced Winifred's lover Billy. To punish Billy, Winifred poisoned Billy and sewed his mouth shut.

Sarah's most powerful ability is her bewitching singing voice, which she uses to bewitch children. Winifred is also seen to have a bewitching singing voice. Sarah is known to have a lucky rat tail, which she recovers after her resurrection. She is also seen to eat spiders. Sarah wears a purple grab and rides a mop in the climax of the film. She is portrayed by Sarah Jessica Parker in the film.

Mary is seen to be the calmest and funniest of the three sisters, and is seen to be more intelligent than Sarah, but not as smart as Winifred. She is seen to have an unusually powerful and accurate sense of smell, and on two occasions, is seen to bark like a dog. She wears a red grab and rides a vacuum cleaner in the climax of the film. She and Sarah both show respect for their sister Winifred Sanderson and will assist her in anything. In the film, Mary is portrayed by Kathy Najimy. 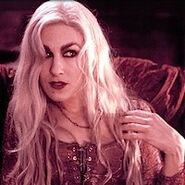 Old Sarah (1693)
Add a photo to this gallery
Retrieved from "https://disneyvillains.fandom.com/wiki/Mary_%26_Sarah_Sanderson?oldid=134418"
Community content is available under CC-BY-SA unless otherwise noted.