Lord Dominator is the main antagonist of the Disney Channel/Disney XD series season 2, Wander Over Yonder. She is a tyrannical overlord that is the top villain in the Galactic Villain Leaderboard. She is voiced by Fred Tatasciore in disguised form and Noel Wells in her real form. She is also Lord Hater's former love interest in the show.

When Lord Dominator is in disguise, she has a metalic bulky black and red armor and robe combo constructed from her lava as well as a black biker helmet over a skull-shaped mask that can change her voice to sound like that of a man. She also has lightning bolt-shaped horns on her helmet in addition to some gloves made of lava. In her true form, she is a thin, pale green-skinned feminine alien with short white hair and pink eyes, and she also has spiked shoulder guards over a black midriff t-shirt with a lava heart emblem on it. Additionaly, she wears a long black skirt, with yellow gloves similar to Lord Hater's, and wears regluar socks and black and white shoes. She has control over lava, which is the source of her powers.

Dominator is apathetic to all the life, and is more evil and tyrannical than Lord Hater is. She also uses her feminine wiles to her advantage, being able to beat the competition in no second. Dominator is also very ruthless and enjoys intimidating people and conquering other worlds, similar to the other villains in the series. 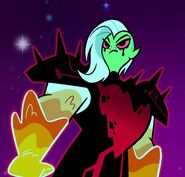 Lord Dominator after she is revealed.
Add a photo to this gallery
Retrieved from "https://disneyvillains.fandom.com/wiki/Lord_Dominator?oldid=138354"
Community content is available under CC-BY-SA unless otherwise noted.