Kazar is a wicked wildebeest who no longer wants to dwell at the bottom of the food chain. He is somewhat insane; he actually wants to eat meat in order to ascend to the top of the food chain, and was successful in convincing other wildebeests. Kazar captures Nigel the koala and reveals to him that a stuffed koala bear fell out of the sky (actually from a plane) and scared the lionesses who cornered him. Kazar therefore wants prey to become predator and vice versa. Kazar then attempts to eat Samson and Ryan when they enter the volcano. Soon Kazar's lieutenant, Blag, and the rest of the wildebeests (who don't really want to turn predators into prey) turn against him and refuse to help him. Enraged, Kazar tries to kill Samson and Ryan himself, but Samson roars a deafening roar, which causes the walls of the volcano to crumble. Kazar is then ditched by his own minions and left to perish in the volcano. Kazar is crushed by a falling rock after catching his front hooves on the plush koala's pull string, while the rest of the animals escape to safety before the volcano explodes. 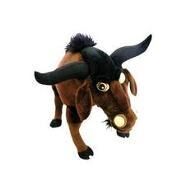 Kazar plush toy
Add a photo to this gallery
Retrieved from "https://disneyvillains.fandom.com/wiki/Kazar?oldid=152776"
Community content is available under CC-BY-SA unless otherwise noted.