The Jesters appear as Governor Ratcliffe's minions who help him to fulfill his voluntary intentions. They appeared during the Hunt Ball singing to the people though they seemed to do things which are not what they appeared to Pocahontas. They perform a song while casting illusions and performing sleight of hand magic tricks for all the guests, but they end the impressive performance with a red smokescreen image depicting bloodthirsty and violent Indians. Soon after, they prepare to torture a bear in front of Pocahontas until she stops them, but also insults King James, Ratcliffe, and the guests, calling them the savages. This results in Pocahontas and her quiet bodyguard, Uttamatomakkin, getting arrested in the process for revolutionary treason. However, they are never seen again after that, not even when Governor Ratcliffe got arrested for his crimes. Presumably, they all three were also arrested for aiding the Governor in his conspiracy plot.

The Jesters are also known to be extremely duplicitous, manipulative, irrepressible, and lighthearted in nature. Despite their goofy ways in entertaining the king's guests, they are completely villainous, uncaring, wicked, seductive, and intelligent for doing something like torturing the bear, knowing full well it would anger Pocahontas.

Harlequin is identical in appearance and is possibly one of Lollipop's twins. He is a short, obese, bald man with puffy jester pants, blue eyes, and his black and white costume portion reversed.

He was voiced by Craig Copeland.

Lollipop is the leading jester and the only female jester. She is a tall, slender woman with dark grayish-purple hair, plum pants, magenta sleeves, a lavender collar, green eyes, and a pointed black and white hat.

She was voiced by Philip Proctor.

Tricksy is also identical in appearance and is possibly one of Lollipop's twins. He is a short, obese, bald man with puffy jester pants, teal eyes, and his black and white costume portion reversed.

He was voiced by Roger Freeland. 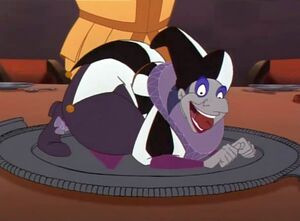 Lollipop sitting on the waiter's plate with an apple in her mouth. 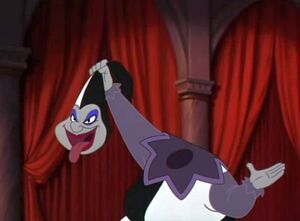 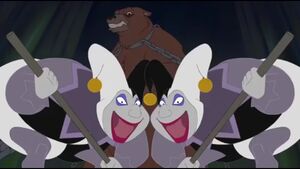 Harlequin and Tricksy preparing to torture the bear. 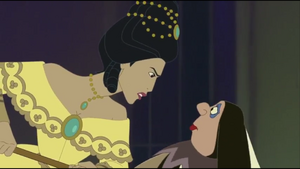 Retrieved from "https://disneyvillains.fandom.com/wiki/Jesters?oldid=152509"
Community content is available under CC-BY-SA unless otherwise noted.