Aladdin, The Return of Jafar, Aladdin and the King of Thieves, House of Villains

Iago is the secondary antagonist in Disney's 1992 feature film Aladdin, and a reformed character in its sequel. He is a parrot who is Jafar's former henchman and pet.

He was voiced by Gilbert Gottfried.

He is a greedy, irritable parrot who was once a minion to the villianous Jafar. However, in the direct-to-video sequel The Return of Jafar, he grows tired of Jafar, with Jafar constantly giving him orders like a henchman (hench-bird in this case), and leaves him to make it on his own. He soon becomes friends with Aladdin and the other heroes, but still remains somewhat greedy and irritable, which often leads him into trouble, much to his dismay. He always gets out of trouble, however, either with Aladdin's help or just pure luck. In said sequel, he helps the heroes destroy Jafar by destroying Jafar's own lamp.

In the Magic Kingdom attraction, The Enchanted Tiki Room – Under New Management, he is the new co-owner (the other being Ichy or Zazu of the Enchanted Tiki Room and plans to put in new, hipper acts, though he is thwarted, and severely injured by Uh-Oa the Tiki Goddess of Disaster, after insulting the Tiki gods). In most of his appearances he is voiced by Gilbert Gottfried.

He one time stopped Malcho, the giant winged serpent.

In the live-action remake, Iago is created through CGI; he is still capable of talking, albeit in a more squawking parrot voice. However, he does it less than in the animated version and only in short sentences mostly composed by single words. He also retains his intelligence and loyalty towards Jafar.

During the climax of the film instead of Jafar changing into a giant cobra to fight Aladdin, the evil sorcerer enlarges the parrot and sends him flying after the magic lamp when Jasmine took it and rode away on Magic Carpet with Aladdin and Abu successfully escaping from him as he reverts back to his normal form. Like in the animated film during the part where Jafar turns into a powerful genie, Iago gets sucked backed into the lamp along with Jafar; later, Genie sends the lamp back far into the Cave of Wonders.

This is the first time Iago was voiced by someone else other than Gilbert Gottfried, the person being Alan Tudyk. 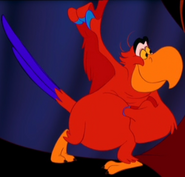 Iago on Jafar's shoulder
Add a photo to this gallery
Retrieved from "https://disneyvillains.fandom.com/wiki/Iago?oldid=149009"
Community content is available under CC-BY-SA unless otherwise noted.