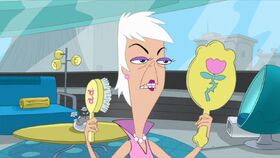 Esmeralda Poofenplotz, more commonly known as Professor Poofenplotz, is the nemesis of Agent Pinky in the TV show Phineas and Ferb. Unlike Doctor Heinz Doofenshmirtz, who limits his attempts for taking over control to the Tri-State Area, a small region inside the city of Danville in the United States, Poofenplotz wants to take over the world. However, she often feels she must look her best and be "drop-dead gorgeous" before she can do so, so some of her schemes and inventions involve obtaining beauty supplies. As she stated, "It's important to look your very best when you're doing your very worst. And by that, I mean evil."

Her most ambitious scheme may have been to become "Queen of the world" by eating a large quantity of royal jelly, thereby gaining the same increased size and longer lifespan of a queen bee. She conceded that she might also develop a "grotesquely large abdomin for laying eggs", but was willing to live with that. After crashing into the Moisty Beauty Works and shortly thereafter being doused in royal jelly, she didn't notice any changes and concluded that her plan was "predicated on a faulty hypothesis". She was then taken to jail by Agent Pinky.

Like Dr. Doofenshmirtz, Professor Poofenplotz is skilled at designing and building various inventions and machines very quickly, pretty much on a daily basis. These machines include a "Me-mobile", a spider-like machine with a large control section shaped like her head, and a "Myself-icopter", a helicopter with the cabin shaped like her head.

Retrieved from "https://disneyvillains.fandom.com/wiki/Esmeralda_Poofenplotz?oldid=90431"
Community content is available under CC-BY-SA unless otherwise noted.