View source
watch 01:36
We're Getting Mutants in the MCU - The Loop
Do you like this video?
Play Sound

Evil Emperor Zurg or better known as Emperor Zurg or simply known as Zurg also commonly known as Emperor Z, the sworn enemy of the Galactic Alliance and the archenemy of Buzz Lightyear. He is one of the antagonists in Disney/Pixar's 1999 film Toy Story 2, sequel to the 1995 film in the saga, and the main antagonist of Buzz Lightyear of Star Command television series from 2000. He also appears in the credits of the 2010 saga sequel film Toy Story 3 as one of the new toys being donated to Sunnyside Daycare.

He was voiced by Andrew Stanton, Wayne Knight, and Frank Welker.

The first form appears during the opening sequence, where he is initially seen tracking Buzz's location through his fortress inside his control room. A little later, he is seen doing battle with Buzz, in which Zurg, using his ion blaster, blasts the top half of Buzz's body into smithereens; however, the opening sequence is revealed to be only Buzz Lightyear: Attack on Zurg, a video game Rex is playing.

Much later in the film, a Zurg toy action figure is accidentally released by Andy's Buzz Lightyear in Al's Toy Barn. Believing himself to be real much like Andy's Buzz has done in the first film, he pursues after Andy's Buzz to destroy him. He seems to have followed Andy's Buzz across the street, through an air vent of Al's apartment, and up the elevator shaft as he is seen arriving atop the elevator when Andy's Buzz and his rescue squad of toys head back to the elevator after Al packs Woody and the Roundup gang into his case and leaves his room to head for the airport. Along with the group is an "alternate" Buzz Lightyear action figure (also released from Al's Toy Barn by Andy's Buzz Lightyear), who also believes himself to be real. Both the "alternate" Buzz and Rex, a fan of the video game "Buzz Lightyear: Attack on Zurg", are caught with surprise by Zurg's unexpected arrival. A showdown occurs between the "alternate" Buzz and Zurg atop an elevator, where Zurg uses his chief weapon (which appears to be a Nerf ball gun). During this battle, after overpowering the other Buzz, Zurg reveals he is Buzz Lightyear's father (a parody of the duel between Darth Vader and Luke Skywalker from Star Wars Episode V: The Empire Strikes Back) and same as Optimus Prime and Megatron. As Zurg sets his gun to his highest level and is about to finish the "alternate" Buzz off (at point-blank range), Rex, not bearing to watch the duel anymore, turns his back, but his large thick tail hits Zurg, knocking him off balance and falling down the elevator shaft to his supposed death. While Rex finally feels excited about finally overcoming his frustration toward not being able to defeat Zurg previously, the "alternate" Buzz feels forlorn about losing his father. Zurg seems to have survived the fall as he and the "alternate" Buzz are seen playing catch and spending "quality time" together when the "original" Buzz and his rescue squad make their way out of Al's apartment. The "alternate" Buzz describes Zurg as a "great dad" as he rushes to catch another ball fired by Zurg.

After this, it is unknown what became of the two.

Zurg is mentioned by a brainwashed Buzz Lightyear (as Lotso had earlier reset him to Demo Mode), as he sees Andy Davis|Andy's toys as minions of Zurg, and is mentioned briefly by Andy when he gives Buzz to Bonnie Anderson. Zurg himself makes a brief appearance in the end credits of Toy Story 3, where he is shown being donated to Sunnyside Daycare in a box along with a dinosaur, a giraffe plush, and two Fisher-Price Little People. He is helped down to the floor by Stretch and meets Barbie and Ken, who welcome him to a now cool and groovy Sunnyside, of which the two are leaders. It is unknown what actually happened to his ion blaster unless it was lost by his previous owner. It is also unknown whether he thinks he's the "real" Zurg or if he already knows that he's just a toy. He is later seen doing the robot dance.

It was revealed on Lee Unkrich's now defunct Formspring that this was a different Zurg than the one in Toy Story 2.

Zurg is brought into the second dimension in this DTV movie. Zurg learns of a huge orb on the L.G.M. homeworld called the Uni-Mind, responsible for the telepathic link between them; he sends his robots to capture it.

Zurg corrupts the Uni-Mind, so he can use it to control minds, while his scientists start making a "Mega-Ray" to use the corrupted Uni-Mind to bend entire populations of people to Zurg's will. Mira and Buzz each attempt to steal the Alpha-One prototype spacecraft; Mira wins and leaves with it. Buzz pursues Mira in his own craft, not realizing Booster and XR are inside it, having entered it to play make-believe. Eventually, Buzz catches Mira and stores Alpha-One in his spaceship's cargo bay; Booster and XR are discovered also. Zurg's Mega-Ray subverts several planets in quick succession such as Rizone and Batheous. He then turns it on Star Command, enjoying the irony of watching his greatest enemies become his mouthpieces. Buzz, Mira, Booster, and XR see the Mega-Ray's beam strike Star Command and enter it to discover its effects. They discover all of the staff have been suborned by Zurg; they flee in Buzz's Star Cruiser. Zurg uses Star Command's entire arsenal, planting a bomb on Buzz's ship. Buzz and the others escape in the Alpha-One just before the bomb detonates, destroying the cruiser. Not knowing Buzz has escaped the bomb blast, Zurg believes he is actually dead and moves on.

Booster accidentally causes the ship to crash-land on Planet Z. There, Buzz insists on finishing the mission alone. When they start to argue over something ridiculous, Buzz orders them to leave. Buzz fights Agent Z, but he is shocked when Agent Z removes his helmet, revealing himself as Warp Darkmatter. Taking advantage of Buzz's momentary confusion at this, Warp knocks him out and delivers him to Zurg. Warp explains that not only had he faked his death at the beginning of the film, but was secretly working for Zurg for years as a double agent. When Zurg mocks Buzz, Buzz responds by dictating his "final log entry". Zurg and Warp watch in amusement, but Mira, Booster and XR hear Buzz's surrender and his final entry (which includes a coded plead for help). Zurg plans to use the "Mega-ray" on Buzz, but XR and Booster arrive in time to rescue him as it fires. Booster and Mira destroy Warp's mechanical arm after Booster lands on him. Buzz and Zurg face each other; Zurg thinks he has won, but Buzz and his three friends surround Zurg and pronounce him under arrest; but Zurg escapes through a distraction. Zurg triumphantly declares if Buzz goes to any planet, he can hear his voice mocking him. Booster and XR capture Warp and leap from Zurg's now-exploding tower. Mira uses her "ghosting" power to take Buzz to the core of the Uni-Mind. In moments the Uni-Mind is restored to normal, freeing the suborned peoples and leaving Zurg momentarily helpless. The unity of the L.G.M. is restored and Warp is arrested.

Zurg is the main villain of the series Buzz Lightyear of Star Command, in which he rules over Planet Z and wants to take over the entire universe. His subjects are Grubs, which are similar to Star Command's Little Green Men, Brain Pods, who work for him as scientists and researchers, and an army of Hornets, which are his robotic foot soldiers used for battle. This incarnation of Zurg is a flamboyant villain who often breaks the seriousness of his evil statements, and is just as much a comic relief character as he is a formidable opponent. In one of his scantest appearances in a Buzz Lightyear episode, Zurg is considered to be the chief suspect in the disappearance of various senators, but Zurg scoffs at "Kidnapping politicians? Even I would not stoop to that!" then challenges all his underlings if they were doing such a stunt behind his back by saying, "Come on, everyone, out with it!"

He is known for videotaping Buzz's speeches so he can secretly mock him, and in one episode tells Buzz that he is his father during a fight (just like he did in Toy Story 2), only to gain the upper hand by using the statement as a "Made You Look" moment to trick Buzz, which strongly suggests that he is not of Buzz's parentage, and that only the toy from the movie believed himself to be the father of the Buzz toy. Despite his campy nature, he is still widely considered the most evil person in the galaxy. In the animated series, he is voiced by Wayne Knight, who had also been in the first film to introduce Zurg, Buzz Lightyear of Star Command where he voiced NOS-4-A2, the main antagonist.

Emperor Zurg is one of the villains that appear in Disney INFINITY. He is apart of the final mission in the Toy Story in Space playset after the player conquers all of the simulation missions. He appears as a giant version of himself in the skies above the alien planet, unable to be attacked or interacted with. The player has to gather the batteries to convert the great tower in the alien city into a shrink ray. Once powered up, the laser is fired and Zurg is shrunk down to toy size and later given to Buzz as a trophy for their heroics. However, soon after, he comically attacks everyone with blasts from his blaster before scurrying off to who knows where.

In the 3DS version, he appears on a game board where the player must start up the shield generators and beat Zurg. He also a character is faced off against in the adventure games.

"So, we meet again, Buzz Lightyear. For the last time!" 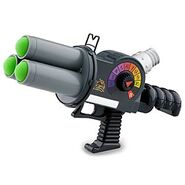 Zurg falls down the elevator shaft.

Zurg as he appears in Toy Story 3: The Video Game (only playable on PS3).
Community content is available under CC-BY-SA unless otherwise noted.
Advertisement