Once Upon a Time

He was voiced by the late Dal McKennon.

He appears to have a similar role to the Raven in Snow White and the Seven Dwarfs. However, he plays a larger role in the storyline and is in almost every scene that Maleficent appears in. In addition, unlike the raven in Snow White, he is completely and genuinely loyal to Maleficent and, unlike the rest of her servants, he is competent and easily succeeds in his task to find Aurora. He is also the only one Maleficent genuinely cares about, and is horrified when he is turned to stone. In return, he apparently cares a great deal for Maleficent, specifically seen when he fell into despair alongside her after her Goons have been revealed to have been searching for a baby for sixteen years, as opposed to a teenager, which Aurora would have been at that point in time.

Unlike her goons, who Maleficent constantly abuses and treats as pathetic wastes, he serves as her confidante and assistant, more so than her lackey, joining her more often than not from scene to scene, and having complete knowledge of her devious plots. He's also second-in-command, having control over the goons, along with his mistress.

His backstory is also explored in the film Maleficent. According to his actor in it, Sam Riley, he was rescued by Maleficent after he found himself nearing death at the hands of a farmer. Out of gratitude, he offered to join her side as her minion, which she accepts. From that point on, he served as her stubborn and snappy, yet loyal, assistant.

In Sleeping Beauty, Diablo is a black raven with pink bags under his eyes. He has a sharp, long yellow beak and yellow claws.

In Maleficent, Diablo's name changes to Diaval. Diaval is first seen with the remaining tufts of black feathers attached to his body. He is later given a cloak that exposes a large claw-shaped scar on his chest. He has two arch-like scars just above his eyebrows. His hair is black in appearance, his hair part is a "V" shape from the front. When Maleficent transforms him into said animals, he always has some raven resembling features; such as a sharper nose or claws. As a bird, Diaval is entirely black.

Diablo is first seen with Maleficent, crashing Aurora|Princess Aurora's christening. There, Maleficent casts a spell on her that schedules her death to come at her sixteenth birthday when she pricks her finger on the spindle of a spinning wheel. After the curse was set, Diablo and Maleficent departed. Oblivious to the villains, her rivals Flora, Fauna and Merryweather changed the curse so that Aurora would only fall into a deep sleep when she pricks her finger. Meanwhile, back at the Forbidden Mountains, Maleficent sends her goons on a hunt for the princess but fail to find her after sixteen years. It is revealed that they were foolishly looking for a baby for the entire hunt. Maleficent explodes in rage and sends Diablo to find her. He begins his search in the forest where he spots magic from wands being blasted out of a chimney. It is from Flora and Merryweather who have been hiding Aurora in their forest cottage to keep safe from Maleficent.

Diablo, knowing about where they live, quickly flies off and sends Maleficent the news to her great delight, and the villains capture Aurora's husband-to-be, Prince Phillip, instead. They hold him hostage in Maleficent's castle but Flora, Fauna and Merryweather break him out. Diablo quickly rallies the goons to attack. However, they stand no chance against the fairies' magic, so Diablo heads for Maleficent's quarters. Merryweather gets mad at him and turns him into stone. Maleficent emerges, planning to silence the goons after hearing all the commotion, but she instead finds his stone body, gasping in shock before witnessing Phillip and the fairies making their escape, prompting her to take matters into her own hands.

Diablo made frequent cameos as one of the guests on House of Mouse. He is perched on Maleficent's shoulder in all of his appearances. In the episode, Halloween with Hades, he doesn't seem to like Hades and even tried to bite his finger. He also appears alongside the villains in Mickey's House of Villains.

Diablo appears in the film under the name of Diaval, and actor Sam Riley plays his human form.

He is a raven and Maleficent's confidant who can under her command take on not just the form of a human, but also a variety of other creatures such as a wolf, a horse, and the dragon that Maleficent turned into in the original film. All his transformations appear very birdlike. In human form, he dresses in black and has a collection of huge visible scars all over his body.

Diaval first meets Maleficent when she saves him from a farmer's net by transforming him into a man. At first, Diaval is upset, protesting, "What have you done to my beautiful self?" Maleficent retorts that he should be thanking her. In gratitude for her kindness, he dedicates his life to serving her. Maleficent commands Diaval to be her eyes and spy on the kingdom. Diaval brings news that King Stefan has had a daughter and a christening will be held the next day. Over time, he helps Maleficent to seek revenge against King Stefan for his treachery and finds where the pixies are hiding the princess. Despite her dislike for the little "beastie," she reluctantly has Diaval care for the princess since the pixies are incapable, as they struggle to adapt in their human forms.

As the years pass, Diaval develops a friendship with Aurora, and when she meets Phillip, he believes that the young man could be the key to saving her. However, all this is in vain when Phillip's kiss fails to awaken her, but Maleficent's motherly kiss is true enough love to wake Aurora. When Stefan and his men capture Maleficent, she turns Diaval into a dragon, and he fights off the guards while Maleficent battles Stefan.

In the last scene, he witnesses Maleficent crowning Aurora the new queen of both the human and fairy kingdoms, and flies happily alongside the reformed fairy.

On the night of a solar eclipse, fairy magic is drained away and spells are broken, resulting in Diablo's revival from the stone curse placed on him by Merryweather. The loyal raven immediately searches for the deceased Maleficent, and upon finding her staff and remains, he uses her magic to revive her from the dead, thus initiating another plot to torture Aurora and dominate the kingdom.

Diablo appears from "Shell Game" to "Dark Passage", acting as Maleficent's scout on the Dream. He sends The Overtakers' henchmen to attack the Keepers, making sure to always stay out of harm's way. He attacked Willa Angelo and Philby in the kitchen, getting captured. Because of the injuries he had inflicted upon him, Philby considered killing him by cooking him alive. However, he was luckily spared by Willa not wanting to stoop to the Overtakers' level, mercifully trapping him in a microwave until it had to be opened for cooking. He later catches Walt's journal on how to completely revive Chernabog, when the Keepers toss it overboard to keep Maleficent and the Queen from getting it.

When Maleficent and the Queen search for Chernabog in a maze, Diablo attacks Finn Whitman, only to be knocked aside into a wall. His defeat, only serves to let Maleficent's anger mislead her into turning into a dragon to kill Finn in revenge. However, he was used as a shield, so Finn could rip out Maleficent's throat. His fate remains unknown, but he may have chosen to die from a lack of nutrition as his master had died.

Diablo appears as a minor antagonist in the Kingdom Hearts series, mostly seen on Maleficent's shoulder on certain occasions.

He is known for announcing the presence of Maleficent many times throughout the series, but enacts this more importantly within Kingdom Hearts II when he not only appears before Maleficent but helps resurrect his mistress from her previous demise by bringing Maleficent's empty robe to Yen Sid's tower, from there the memories of Flora, Fauna and Merryweather bring her back to life. Later on, Pete travels to Hollow Bastion to see if the rumors of Maleficent being killed off was true. Just then, Diablo and the revived Maleficent arrives.

In Birth by Sleep, Diablo appears briefly as he watches Prince Phillip and Aqua trying to escape the Forbidden Mountain. He is the first to notice them escaping and quickly summons the goons to attack them.

In Dream Drop Distance, Maleficent gives the raven Queen Minnie's crown as well as a letter to be delivered to Mickey at Yen Sid's tower to lure him back to Disney Castle.

Diablo has made a few appearances in the Disney theme parks around the world, always seen alongside Maleficent. He appeared on her staff in the Magic Kingdom parade Celebrate A Dreams Come True Parade. He would sometimes appear on her shoulder in some Disneyland Paris shows. He also appeared in a few attractions including Sleeping Beauty Castle walk-through and Sorcerers of the Magic Kingdom. A statue of him can also be seen near Le Château de la Belle au Bois Dormant. 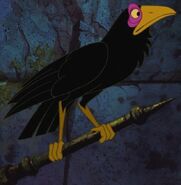 Add a photo to this gallery
Retrieved from "https://disneyvillains.fandom.com/wiki/Diablo?oldid=148965"
Community content is available under CC-BY-SA unless otherwise noted.