Wreck-It Ralph
The Cy-Bugs are robotic insects from the video game Hero's Duty and the secondary antagonists in the 2012 Disney animated film Wreck-It Ralph. They are a deadly threat to not only their game, but the entire arcade. They know just three things: Eat, destroy and multiply. Players beware! Cy-Bugs can morph into anything they eat—from an attack buggy to an assault rifle. They do have one weakness—an attraction to bright light. (They are bugs, after all.) They do not speak, unless they have eaten someone who does (like one of them having eaten Turbo).

Ralph, the former Bad Guy of "Fix-It Felix Jr." accidentaly unleashes these antagonists upon the arcade and must stop these monsters from destroying the arcade for good.

The Cy-Bugs, as their name suggests, are robotic creatures closely resembling insects, most notably silverfish. Like insects, they are instinctive and only have three motives: kill, eat, and multiply. They attack in swarms and devour anything in their path, making them even more destructive. Because they were designed to be primitive and bestial, they are non-sentient and dangerous beings in both game and reality as opposed to villains who are simply evil in their game. This effectively makes them viruses if released in the game world. In their game, their eggs are kept at the tower for every new game that starts, as they are native to the program and cannot be removed. Hatchlings are quite vicious like the adults and grow at a rapid rate. A single Cy-Bug can lay hundreds of eggs given it has proper conditions to survive and sustain them. The most notable, and deadly, ability the Cy-Bugs contain is turning into anything they eat, be it organic or inorganic. The results can range from simply changing parts of themselves into weapons (etc. when one ate Ralph's gun and turned his appendages into the same kind) to a completely different form of the original (etc. when many ate the contents of Sugar Rush, turning their carapaces into lookalikes of candy, cakes, and chocolate). Devouring video game characters inside their game doesn't seem to change them (etc. Sergeant Calhoun's husband to be). Ones outside of their games, however, causes them to transform into a horrific fusion of the character and the bug, and the character seems to become the dominant personality (albeit, more psychotic and sinister), while retaining the Cy-Bugs' basic instincts (etc. King Candy).

Though they are mighty opponents, the Cy-Bugs do have weaknesses. Laser guns from Hero's Duty and other weapons can destroy Cy-Bugs as long as the guns aren't eaten, otherwise the Cy-Bugs can use their own foe's weapon against them. Devouring fragile objects will also cause the Cy-Bug to lose their armor and become more vulnerable to physical attacks (for instance, when they devoured the candy from Sugar Rush, they were easily crushed by Ralph and crumbled when he smashed them). Their greatest weakness is their attraction to immense rays of light, similar to a real bug's attraction to a bugzapper. Once they sense a form of light, the Cy-Bugs cannot stop themselves from heading towards it, even if it is lethal. As a result, a special beacon has been built into the tower that attracts and destroys them between games.

The Cy-Bugs first appear in the 1st-person shooter game, Hero's Duty, preparing to attack a fleet of soldiers. When Wreck-It Ralph interfered with the game, one of them came close to nearly killing Ralph and the player . This forced the soldiers to end the game early and stopped the swarm by launching the tower's beacon of light, immediately attracting the Cy-Bugs and killing the swarm. Later, Ralph climbed to the top of the tower to achieve the gold medal and accidentally hatched one of the eggs at the top. The hatchling clung to Ralph, causing him to become disorientated and fall into an escape pod. The two were launched out of the tower into Game Central Station and then into Sugar Rush. The hatchling quickly grew and ate away some of the escape pod and proceeded to attack Ralph, however the escape pod's ejection button caused Ralph and the Cy-Bug to be flung in the air, with the Cy-Bug being hit into a Candy Cane tree and into a pond of extremely sticky taffy, where the Cy-Bug seemingly drowned.

It is revealed, however, that the Cy-Bug survived and burrowed its way underground. It found a candy root and tried to eat it, and transforms into a colorful candy hybrid as a result. Sergeant Calhoun later discovers its massive nest, where the Cy-Bug had quickly reproduced, multiplied, and created more candy-bug hybrids by feeding its offspring with the indigenous sweets of the land.

The creatures make their move when the race begins, and destroy everything in site. The attack enforces the evacuation of the Sugar Rush residents, but leaves the racers Vanellope von Schweetz and King Candy in danger, later King Candy is Turbo in disguise. Vanellope escapes from him and races ahead, but Turbo gets swallowed by one and ends up taking control of it, turning into a viral hybrid monster, and becomes the Cy-Bugs' leader. Ralph overhears Calhoun explaining to Felix that the bugs cannot be stopped without a beacon and comes up with an idea to erupt the Diet Cola Mountain to produce another beacon of light. Though Cy-Bug Turbo tries to get revenge on the arcade and to kill him, Ralph breaks free from Turbo and brings down an entire crater of Mentos into the lava, causing the mountain to erupt. The eruption produces the beacon, and the Cy-Bugs who have been closing in on Calhoun, Felix and Vanellope (who glitches past the bugs to go to Ralph's rescue) stop their advances, turn to the beacon, fly toward the light and get vaporized along with King Candy/Turbo. This kills all the Cy-Bugs and Turbo for good. 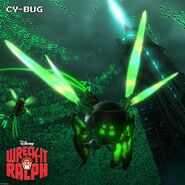 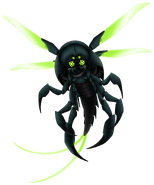 Retrieved from "https://disneyvillains.fandom.com/wiki/Cy-Bugs?oldid=149069"
Community content is available under CC-BY-SA unless otherwise noted.