The Clowns are an antagonistic group of unnamed characters who appear in the 1941 film Dumbo. The Ringmaster is their leader. When Dumbo is made a clown for ruining the elephants' act, they tease and taunt him relentlessly and make him the fool of all of their acts.

When Dumbo learns to fly, he zooms down, scaring the clown right out of the clowns, and making them run away. They promised themselves they would never try and tease the poor elephant again. The Clowns work for the Ringmaster for a circus. They are first seen in the parade on the circus' opening day, doing various goofy acts.

The clowns are mute during their act, but seem to be generally argumentative and loud-mouthed otherwise. It is unknown what they look like without their costumes, as they are only seen as shadows.

The clowns first appear during the circus parade, and start a fireman act as Dumbo's first performance as a clown. During the act, one wears an elephant mask and a dress pretending to be Dumbo's mother shouting "save my child!", and the others appear dressed as firemen, with one wearing the uniform of a fire chief. The only one that talks during the act is the "mother." They perform goofy acts such as dousing a fire with gasoline, roasting hot dogs in front of a burning building, or throwing water on a flowerbed instead of the fire. For the climax, Dumbo, who is dressed like a baby and wearing clown makeup, is made to jump from the building, where he is to land on a life net, which he is then meant to fall through and into a hidden tub of pie. He resists, but one clown sneaks up from behind him and whips him with a board. He ends up landing in the pie, much to everyone's amusement.

Following the act, the clowns are shown in their tent changing into casual clothes and celebrating with a bottle of champagne over the popular act. They believe they will earn a lot more money by making the height greater and thus more death-defying. One of the dumber but more sympathetic ones comments that they may accidentally hurt Dumbo if they make the act too extreme, only to be brushed off by two others who reply that "elephants ain’t got no feelings" and that they are "made of rubber". As they leave to tell their boss of their idea for their next act, they hit the table with their champagne bottle on it. The champagne is knocked into Dumbo's water bucket, resulting in him and Timothy Mouse getting drunk.

The clowns ultimately get their comeuppance (along with the Ringmaster) during the second act when Dumbo flies off an 18-story-tall cardboard building instead of landing in the pie. This scares them, who either take cover in water barrels (one who was standing on a ladder loses his balance and falls into the pie himself after Dumbo soars at him, the splash soaking the other four of them) or drive their fire engine into the burning building, only to reemerge with scorched rear ends, screaming.

The clowns are not seen again for the rest of the film. What happens to them after the circus is renamed "Dumbo's Flying Circus" is unknown, although it is assumed that they got fired or quit their jobs. 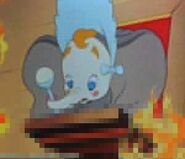 The clown's defeat
Add a photo to this gallery
Retrieved from "https://disneyvillains.fandom.com/wiki/Clowns?oldid=151023"
Community content is available under CC-BY-SA unless otherwise noted.