Boba Fett is a supporting antagonist in the Star Wars saga. He is a mercilous and notorious Mandalorian bounty hunter who has allied himself with a bunch of villains from the franchise. This includes: Jango Fett (his biological father), Jabba the Hutt, and Darth Vader. He is one of the more popular villains of the franchise.

A young Boba Fett first appears in Attack of the Clones, where he is shown as the cloned son of Jango Fett. He assists his father in the arena, and is devastated when his father is decapitated by Mace Windu. At that point he decided to avenge his fallen father by following his footsteps and becoming a bounty hunter.

He appeared in A New Hope in a brief cameo appearance after Han finishes talking with Jabba.

He later is a supporting antagonist in The Empire Strikes Back where he is one of the Bounty Hunters hired by Darth Vader with the task of capturing Han Solo and the rest of the Rebel Alliance. He takes Solo, still frozen in carbonite to Jabba the Hutt.

In Return of the Jedi he is seen at Jabba's palace and later at Jabba's sail barge where he tries to attack Han, Luke, and Chewbacca on the mini-ship, only for Han to strike at his jetpack, causing the Mandalorian's jetpack to go haywire, slamming him into the sail barge, and tumble off down the sand pit right into the awaiting mouth of the Sarlaac to his supposed death.

According to a novelization, Boba Fett, blasted out of the Sarlaac and took refuge in Tatooine, meaning he may return in Star Wars Episode 7.

Boba Fett is a bounty hunter who is obssesed with wanting to kill the Jedi and especially Han Solo, who has a huge price on his head and is determined to kill him at all costs. He is the cloned son of Jango Fett. 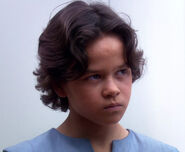 A scarred and alive Boba Fett on Tatooine.

Boba revealing himself to Din Djarin.