Wickedpedia
Register
Don't have an account?
Sign In
in: Masters of Evil, Pirates of the Caribbean villains, Live-Action,
and 29 more 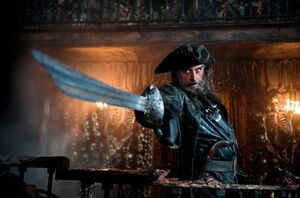 Between At World's End and On Stranger Tides

Blackbeard attacked the Black Pearl without being provoked, capturing the crew in the ship's own riggings. However, Hector Barbossa escaped by chopping off his foot. Blackbeard shrunk the ship down with his voodoo magic and placed it in a bottle.

Having received a prophecy that a one-legged man would end his life from the quartermaster, Blackbeard began seeking Jack Sparrow, who was said to have been to the Fountain of Youth, which could save his life. He sent his daughter, Angelica to pose as Jack and recruit more crew-members with the possibility of capturing Jack. His plan was successful; he forced Jack to lead them to the Fountain with the threat of a voodoo doll. He captured a mermaid for her tear as part of the ritual to gain the years of life from another, and badly wounded the missionary she was in love with to get it. Succeeding in getting to the Fountain of Youth, he once more met Barbossa, the one-legged man in the prophecy and fell victim to a poison sword stab. Jack then tricked him into drinking from a chalice without the mermaid's tear in it to save the life of his daughter, who had also been poisoned by the sword. His remains now lay at the Fountain's ruins.

Community content is available under CC-BY-SA unless otherwise noted.