Bellwether was the assistant mayor to the mighty Mayor Lionheart, whose impatience and intolerance towards even the slightest amount of incompetence often resulted in the former's humiliation. Like Judy Hopps, Bellwether had apparently endured a life of neglect, implied to have repeatedly been at the hands of predator mammals. Over time, she would develop a disdain towards them, and their treatment towards prey mammals, setting a goal to someday make Zootopia a place where prey reign supreme, and predators are labeled as nothing more than worthless, bloodthirsty savages. To do so, she allied herself with rams who shared her sentiments, and used flowers known as night howlers to create a chemical drug capable of turning civilized mammals savage. Once predators were deemed too dangerous for society, Lionheart, as the plan would go, would be removed from office out of fear, while Bellwether would be promoted, thus granting her control over the city, and the satisfaction of establishing prey as the dominant species.

Assistant Mayor Bellwether is a sweet sheep with a little voice and a lot of wool, who constantly finds herself under foot of the larger-than-life Mayor Lionheart.[2]

Bellwether epitomizes a wolf in sheep's clothing: on the surface, she appears to be a sweet, tremendously shy, nerdy, laid-back, friendly, optimistic and finicky, albeit overworked sheep doing all she can to help the city, though inside hides a ruthless and embittered mind. Years of discrimination and lack of consideration from her predator coworkers engineered an utterly vengeful, scheming and diabolical personality that was devoted against all predators, hidden behind her seemingly meek disposition.

Bellwether's perception on predator mammals is that they are an irredeemable breed with an unjustified superiority complex over prey. To Bellwether, majority rules, and in Zootopia, it is fact that the prey population drastically outnumbers that of predators. Bellwether uses this information as a means to justify a hostile revision of the city's social structure—one in which she feels entitled to rule. Clinging on to her beliefs that acceptance cannot be earned, Bellwether resorts to the use of manipulation and fear to enact her ideology. She ultimately cares little for the prey population as individuals, instead viewing them as a collective capable of heightening her own placement on the political ladder to power. Even so, she is sympathetic towards the prey citizens who go through tribulations from predators in a similar manner of her own past (she initially considered Judy an acquaintance because of their similarities in this regard). Anyone who sees predators beyond Bellwether's views, however, immediately lose her sympathy.

Aside from obtaining control over the city, Bellwether's plot is primarily driven by her resentment towards Lionheart. Instead of subjecting Lionheart to becoming savage, Bellwether instead develops her plot to end in such a way that it impacts Lionheart personally: the former's title as mayor is stripped and his positive reputation amongst the citizens is tarnished, thus destroying his most cherished assets while also ensuring her own accession.

Though Bellwether appears harried, and by extension bumbling, most of the time she is presented, she is secretly a master organizer, operating with lethal cunning. Thanks to her occupation and access to city resources, she was able to create the predator panic without any attention drawn to herself, as well as orchestrating Judy's entire investigation on the mammal cases behind the scenes, leading to Lionheart getting arrested instead; due to her harmless appearance and demeanor, Bellwether was less likely to be suspected for her crimes. However, she is subject to her own overconfidence, which became her own downfall: when she believed she had the upper hand, Bellwether admitted her entire plot to Judy and Nick out of pride, unaware that her confession had been recorded by the duo. Furthermore, her notion that predators are unsympathetic creatures caused her to underestimate Lionheart's character when planning her scheme; although she successfully stripped him of his political status, Lionheart remained content in the end, and was evidently accepting of his own fate so long as the city was safe, thus invalidating Bellwether's supposed success in emotionally damaging him.

Bellwether is first seen during Judy's induction into the Zootopia Police Department, where she stands alongside Mayor Lionheart, and is tasked with badging Hopps. Bellwether shows great pride in Zootopia's first rabbit officer, proclaiming that it is a momentous day for "little guys", referring to prey. Before her words can run further, Lionheart rudely removed Bellwether from Judy, and subsequently blocked her from the flashing cameras of the press.

Prior to Judy's first day as an officer, Emmitt Otterton goes missing for days, forcing his distraught wife to seek help at the ZPD. Bellwether is present when it is Judy who volunteers to find Emmitt, and sends Lionheart a knowing text to congratulate him on the growing success of the Mammal Inclusion Initiative, referring to Judy's newfound role as a detective to a major case. Bellwether then speaks to Judy, telling her that she always has an ally at City Hall, should she need any important favors.

Later at City Hall, Bellwether is seen struggling for Lionheart's attention, needing him to discuss various matters regarding the city. Lionheart, seeming more aggressive than usual, coldly asks Bellwether to take care of the matters herself, and to cancel his afternoon, as he needs to run out for confidential matters. Feeling defeated and exhausted, Bellwether sadly gathers the paperwork to begin her assignments, before receiving a surprise visit from Judy and her accomplice, Nick Wilde. Judy explains that she needs access to the city's traffic cameras, which Bellwether obliges to in her "office", which is really the boiler room. While doing so, Bellwether laments to Judy and Nick, expressing her excitement in doing something of importance, to which Judy replies with confusion, as she believes the title of "assistant mayor" to be rather significant. Bellwether merely sees it as being a "glorified secretary", and notes her suspicion that Lionheart may have selected her for the sake of winning the sheep vote. Just then, Lionheart pages Bellwether, scolding her for failing to cancel his afternoon. Bellwether hurriedly rushes to finish this assignment, leaving Judy and Nick with her computer.

Using the traffic cameras, Judy and Nick are able to find an asylum with over a dozen predator mammals imprisoned, and all of which have mysteriously gone savage. The imprisonment was at the hands of Mayor Lionheart, who was desperately searching for the reasonings behind the mysterious outbreak, but to no avail; keeping it confidential to prevent citywide panic, and by extension, the loss of his position. Judy alerts Chief Bogo, and Lionheart is arrested and removed from office. Bellwether, as a result, becomes the official mayor of Zootopia.

Judy, meanwhile, is hailed a hero, and a press conference on the savage predators is held. Bellwether is present, and to her advantage, Judy accidentally calls out predators as naturally savage, with potential to revert to their original, bloodthirsty natures; disturbing the press and causing a citywide panic. Following these events, Bellwether summons Judy to her office and, alongside Chief Bogo, offers her to be the public face of the Zootopia Police Department, as prey mammals look to her as a hero for uncovering the "truth" about predators. Judy denies, feeling she's failed the city, having torn it apart instead of making it a better place, and officially resigns from her position as a police officer.

Some time afterwards, Judy discovers that unique flowers known as "night howlers" are the cause of the strange behavior infecting predators—not natural instinct—and rushes back to the city to reveal the truth. After she and Nick interrogate Duke Weaselton, they discover that a ram named Doug has been going around purchasing night howlers, and creating a drug that, when injected into predators, turn them savage. Judy and Nick infiltrate Doug's laboratory, steal his equipment as evidence to show to the ZPD, and a battle ensues. Additional ram minions alert Bellwether about the situation, prompting her to take matters into her own hands. Nick successfully retrieves the evidence to show Bogo, but before he and Judy can make it to him by cutting through the natural history museum, Bellwether arrives.

She asks for the case containing the evidence, presenting herself as being proud of Judy's success, but when Judy questions how Bellwether knew of their whereabouts, the ploy is broken, and Bellwether reveals her true colors and then sends her rams to capture the heroes. Judy is injured while trying to escape, and she and Nick are eventually thrown into a pit exhibit, trapped. Though Bellwether made an attempt to have Judy join her side, she instead results to turning Nick savage so that he will kill Judy, and the entire situation will look like another savage outbreak demonizing predators. Bellwether shoots Nick with a gun and alerts the ZPD that a savage fox is in the museum. While Nick apparently becomes feral and stalks Judy, Judy asks why Bellwether is doing this, to which Bellwether confesses her plot to dart all predators in Zootopia to ostracize them from her envisioned prey-dominated society. Just as Nick appears to have bitten Judy, the two reveal that they were merely and deliberately acting out the scene to deceive Bellwether and make her spill the beans. They also reveal that the serum of Bellwether's night howler gun has been replaced with blueberries, meaning Nick had never turned savage. Angered at this failure, Bellwether, having framed Lionheart, threatens to frame Nick and Judy, claiming that it's "her word against theirs". However, Judy responds by revealing that she had recorded Bellwether's confession with her carrot pen and plays the recorded monologue, just as Bogo and his force arrive.

Bellwether is arrested along with her accomplices, and is sent to prison. During the credits, she is last seen angrily watching a live stream of Gazelle's concert performance, which the prison inmates around her seem to enjoy, much to her annoyance. While watching, Bellwether notices, to her surprise, one of the inmates touching her wool and irritatedly swats his hand away before going back to watching the live stream. 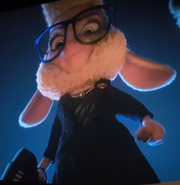 Add a photo to this gallery
Retrieved from "https://disneyvillains.fandom.com/wiki/Bellwether?oldid=152478"
Community content is available under CC-BY-SA unless otherwise noted.