Adam Wylie
Bananas B is a magical talking monkey, and the tertiary villain from the animated television show American Dragon: Jake Long.

Bananas B was assigned to be Jake's Animal Guardian when Fu Dog's license expired. At first, he was much better at the job than Fu Dog, but when Chang escaped and went after Jake, he switched sides out of fear for his life. He would have helped Chang kill Jake if Fu Dog had not arrived to help. Ever since then, he was Chang's assistant, helping her in whatever evil scheme she was doing, including the revival of the Dark Dragon.

However, during the showdown between the Dragon Council and the Dark Dragon, he once again showed his cowardly side, abandoning Chang and The Dark Dragon, saying he "hates violence". While attempting to flee the temple, he was confronted by a gleeful Fu Dog who proceeded to chase him[1]. 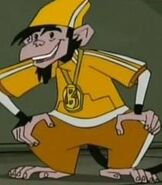 Retrieved from "https://disneyvillains.fandom.com/wiki/Bananas_B.?oldid=145692"
Community content is available under CC-BY-SA unless otherwise noted.