Amorphous Shape is a character and an antagonist from Gravity Falls. He is a demon and a interdimensional criminal from an unknown dimension and one of Bill Cipher's friends.

Amorphous Shape resembles an unfolded Rubik's Cube, composed of many colorful contorted squares of light blue, light green, purple, pink and orange, several of which have eyes on them. It has a thin white aura and two long, tail-like protrusions, both of which hang off of the two purple colored squares on its body. The protrusions are tipped with glowing blue tufts.

Eons before the events of the series, Amorphous Shape indulged in criminal activities before being called together by Bill Cipher, along with 8 Ball, Hectorgon, Kryptos, Teeth, Paci-Fire, Keyhole, Pyronica, Lava Lamp Shaped Creature, and Xanthar.

In "Weirdmageddon 2: Escape From Reality", Amorphous Shape and the rest of Bill's minions attempt to leave Gravity Falls and spread their chaos worldwide, but are stopped by an invisible barrier around the town.

In "Weirdmageddon 3: Take Back The Falls", following Bill's defeat, it was sucked back into the Nightmare Realm along with its comrades. 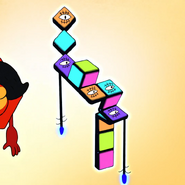 Add a photo to this gallery
Retrieved from "https://disneyvillains.fandom.com/wiki/Amorphous_Shape?oldid=145533"
Community content is available under CC-BY-SA unless otherwise noted.